The highest purpose of chanting is to help awaken us to our own spiritual potential: to bring us closer to Self-realization. 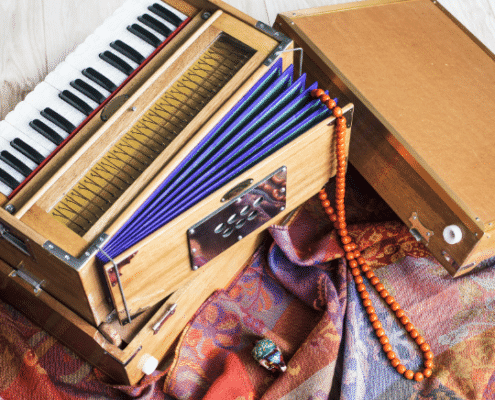 Chanting has the power to bring a divine response to all who practice it with deep attention and feeling. Singing, Yogananda said, is a divine art; and devotional chanting is the highest form of this art because it leads to attunement with the cosmic vibration. In devotional chanting, you learn to attune the “receiving station” of your heart to the channel of communion with God through sound.

Rid yourself of negative moods

Devotional chanting can take your negative energy and turn it right around into positive energy—a flow toward, rather than away from, God. Twenty-six years ago, I decided that Ananda was the place of all places where I truly wanted to live. But personal circumstances forced me to return to my home in Texas for a long time. It seemed devastating to me—a very dark period in my life. And so I indulged in some really black moods about the unfairness of life.

I wanted to talk to somebody about Hong-Sau or Lahiri Mahasaya or something along those lines, and there wasn’t anyone around to whom I could relate.  My attempts at meditation weren’t going very well either.

But I learned that by chanting I could change my black moods into joy and put myself into a space where I really wanted to upgrade my meditations. I didn’t have a harmonium, or even the Cosmic Chants book, but I did have a cassette player and a few tapes from Ananda—“O God Beautiful,” “Songs of the Soul,” and the Joy Singers Christmas tape.

I would put on these tapes, listen, and eventually sing along as I learned the words and the melodies. Over and over I played them, and they became part of my consciousness. I learned that they had the power to pull my heart out of sadness and loneliness and into a place of real joy. I chanted with Swami, I chanted with my Ananda brothers and sisters—and I was transported through the power of this devotional music to the blessedness of Ananda and the joy it represented to me.

Find protection in time of need

Chanting can help you to overcome temptations and attachments, and to realize God’s presence under the worst of circumstances. Swami Kriyananda tells of going to the nightclub district in San Francisco on a Saturday night to meet someone in the music business. It was certainly not a place for a devotee to be on a Saturday night! So Kriyananda began to chant very softly or mentally: “Sri Ram, jai Ram, jai, jai Ram Aum.”  Instead of feeling dragged down by the low and worldly vibrations all around him, he felt totally uplifted and joyful.

Chanting has the power to remove obstacles and to help you overcome fear. Fear, particularly fear of failure, is the “Great Paralyzer,” often causing us to sink into pits of inertia.

One time I had to drive 150 miles alone in Texas at night in a broken-down car with no money. The car was acting weird and it was dark and I was scared. So I started chanting. I tell you, I chanted as well as I’ve ever chanted in my life, for I was motivated! I made it to Austin and back safely, and then the car broke down. To this day, I truly believe that God and I “chanted” my car all the way down that lonely Texas highway to my destination.

Sing to the God within you

Paramhansa Yogananda tells in Cosmic Chants how thousands chanted, “O God Beautiful” in Carnegie Hall in 1926 “in a divine atmosphere of joyous praise….” The next day many men and women testified to the God-perception and the healing of body, mind, and soul that had taken place during the sacred chanting.

Often we feel, “I want to love God more, but how do I do it?” Sri Yukteswar says in The Holy Science that we can’t put one foot in front of the other on the spiritual path without “the natural love of the heart.”

Don’t sing to the person sitting nearby, or to the trees, the sky, or the walls. Don’t even sing to yourself. Sing to God. Sing to the God within you. That’s Who you’re singing to, with a prayer in song, with the power of increasingly focused, one-pointed devotion.

A resident of Ananda since 1975, Savitri is a Lightbearer Minister, Counselor, Raja Yoga Teacher, and former co-director of the Ananda Meditation Teacher Training program. Among Ananda’s most popular teachers, Savitri has taught at The Expanding Light and several of Ananda’s branch communities since she came to Ananda. She lives in Ananda Village with her husband Nayaswami Sudarshan.

An expert in the chakras for the last 20 years, she has taught hundreds of classes, workshops, and seminars on understanding and awakening the chakras. Among other courses, she currently teaches Mystical Keys to Awakening and The Seven Gates to Freedom, an experiential chakras course. She also is the author of the Chakras for Starters book and video, as well as a video/DVD called Yoga Postures to Awaken the Chakras. Savitri’s perceptiveness in a trilogy of novels is highly valued by readers of any or all books from the collection.